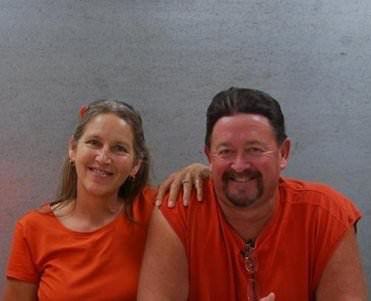 James Stallings, the owner of Xtreme, has been painting since 1976. In the 80's he painted semi trailers for the NHRA pro race teams in Dallas for Chaparral Trailers. In the early 90's he subcontracted the paint & graphics for Champion Trailers in Lewisville, TX and started a relationship with Prevost. At that time he, along with Greg, Cleve and Sako, painted all the new Prevosts for Vogue, and they were the only Prevost certified painters in Texas. Then, in 1999 Xtreme Paint & Graphics was born in Denton, TX. He and his wife Jennifer moved to the East Texas area in 2000 when James and 3 key employees from the Dallas area opened the paint facility for the Foretravel factory. They continued to paint trailers and motor homes at Competition Trailers in Henderson, TX as Xtreme Paint & Graphics. In 2005 he left the factory, purchased our current facility, and focused on collision repair, exterior updates and painting on high end motor coaches and RV's. We have continued to grow through word of mouth, hard work and dedication to high quality standards.

Greg Hughes began his custom painting career in 1975 in Grapevine, TX. He met James in the early 1990's and began working with him on the high end semi-trailers and Prevost coaches, and was also certified by Prevost. He moved to east Texas with us and became the shop foreman, and so much more.

Cleve Amos began working with James in 1996 in Comanche, TX, then moved to the Dallas area and worked with James at Champion Trailer. He was one of 4 who were trained and certified by Prevost, and later came to East Texas and helped build Xtreme into what it is today!

Rance Ruthstrom started working in fiberglass on his own in 1999, then in 2001 worked at Foretravel in the fiberglass department. He came to Xtreme Paint & Graphics in 2005, and in his time here he has become an expert in building molds and new parts as well as collision repair. Rance was the innovator behind the industry's first euro headlight conversion. He is also responsible for the R&D on our taillight and many other exterior conversions. If there is an electrical issue, he is our go-to guy.